'Outside the Lines' at Tower Art Gallery

Last Friday we paid a visit to the Tower Art Gallery, which is ran by F6 resident and urban artist Rob (pictured below looking very dapper) and which also held Newcastle's first all-girl graffiti exhibition, Girls on Top (http://f6studios.blogspot.co.uk/2013/11/girls-on-top-colours-preview-at-tower.html). The gallery is currently exhibiting the work of local extreme photographer Lucinda Grange to promote her new book, 'Outside the Lines'. At only twenty-five years old, Grange has experienced thrills that would make Evel Knievel green with envy (well maybe not quite, but her death-defying photography has captured the attention of GQ Magazine...). 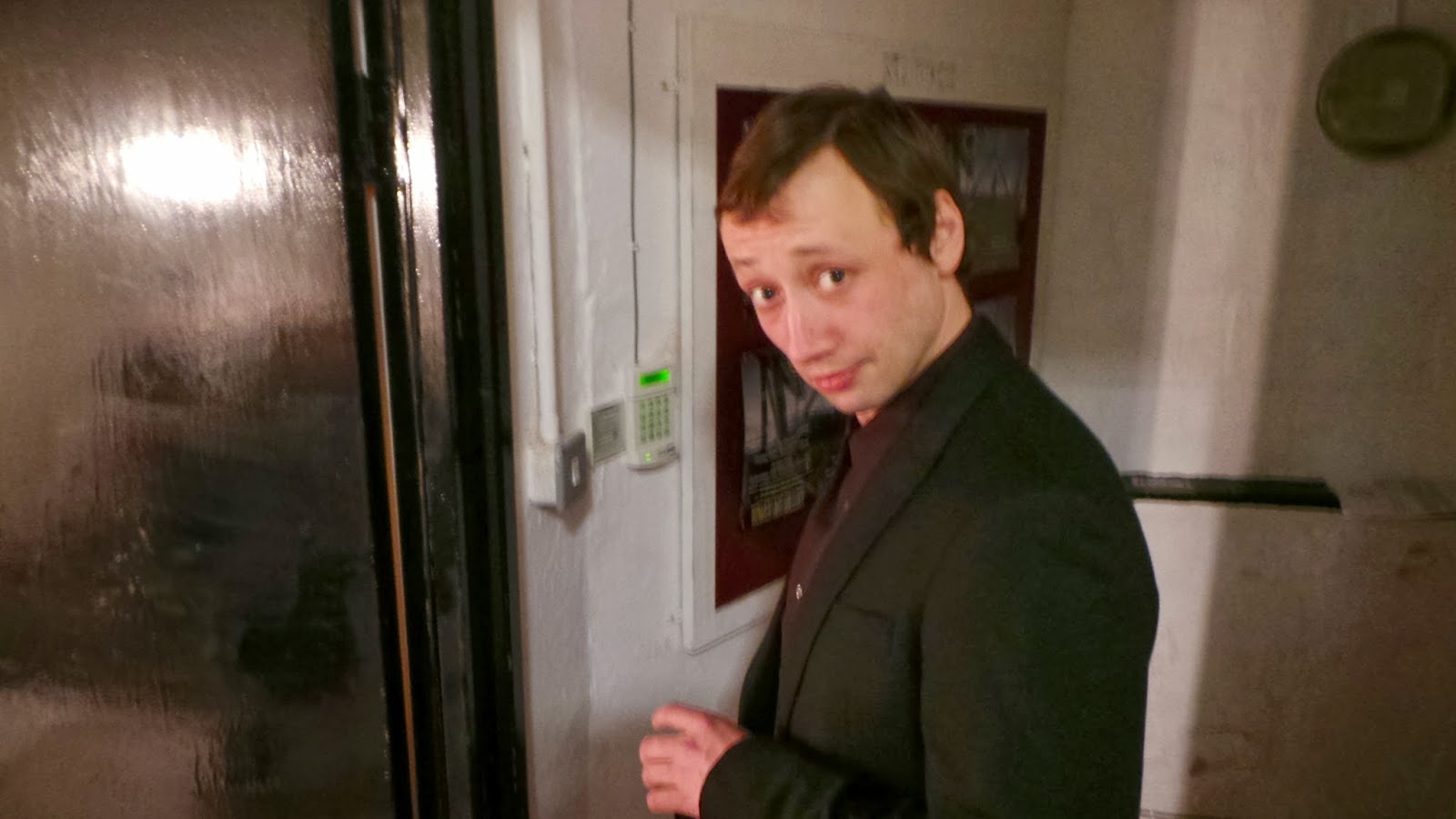 Some of Grange's work involves her perched on the edge of iconic structures such as the eagles of the Chrystler building and the Manhattan Bridge in New York, and standing in the  abandoned house of the Bulgarian Communist Party.

I was lucky enough to talk to Grange about some of the stories behind her photography, and was amazed by her brushes with death and her absolute lack of fear. The story that stood out most was when she travelled to Cairo at a time of great unease, when violence was rife and curfews were strict. She discussed how she managed to get the images of Max and herself on top of the Great Pyramid of Giza...it involved sneaking into the pyramid, hiding in a tomb only inches from a guard armed with a very large gun, and waiting till the coast was clear before climbing on top of the pyramid...and taking her clothes off (not on this particular image). Grange is not shy of a naked photo or two, as she has also been photographed naked at the top of the Manhattan Bridge.

Here are some of the pictures from her exhibition:

And here is a cheeky pic of our F6 directors, Helen (left) and Lydia (right). 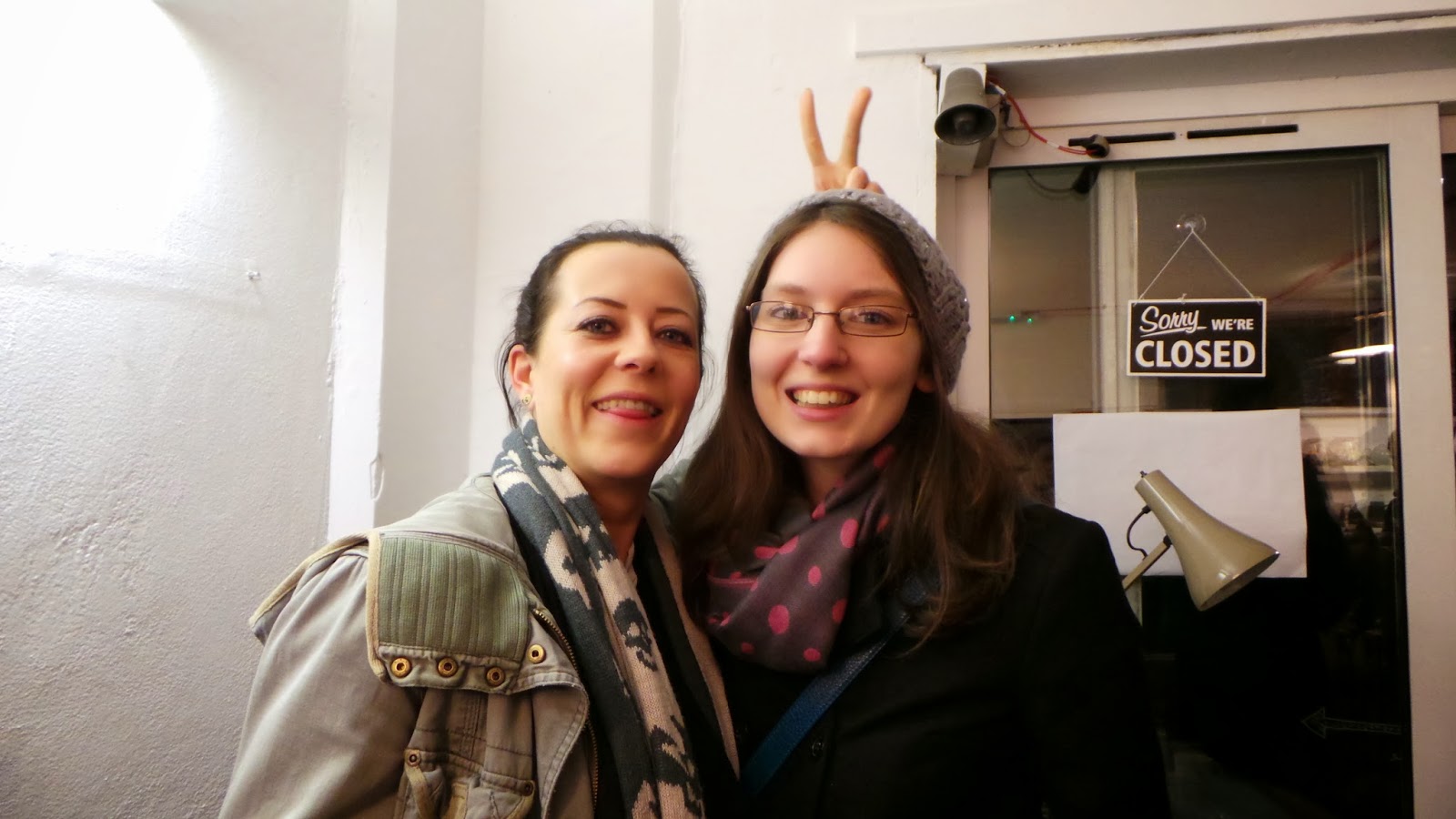 It's not too late to see more of Grange's photography at the Tower Art Gallery, and she's even doing an Artists Talk there on Saturday 1st February at 2pm for only £4. Alternatively, here is a few links to some of her work:

Hello and a happy new year to you all!

As the weather has been pretty dull and bleak lately, let me introduce you to local artist Katherine Rogers and her colourful, incredibly detailed paintings. With an impressive 27 years in the art and design industry, she discovered her love of painting following several years of working as a graphic designer and illustrator, and now divides her time between looking after her two young children and pursuing her artistic career. The subject of her paintings are diverse and range across landscape, portraits, birds and objects of curiosity... 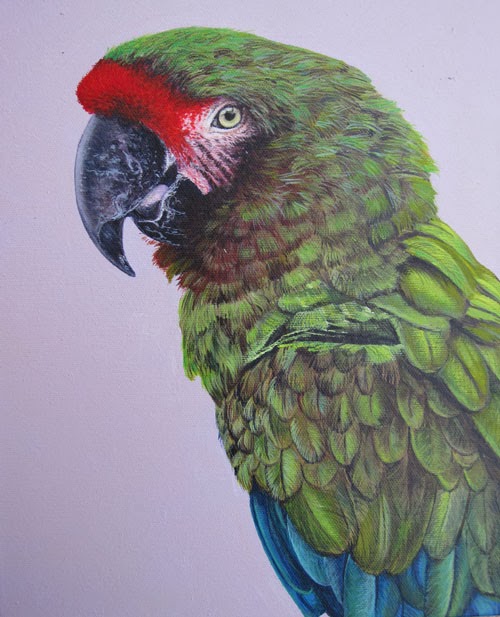 I'm definitely guilty of being a little partial to her large, bold, Rosenquist-style paintings of interesting objects, which include eyelash curlers and a robotic cat... 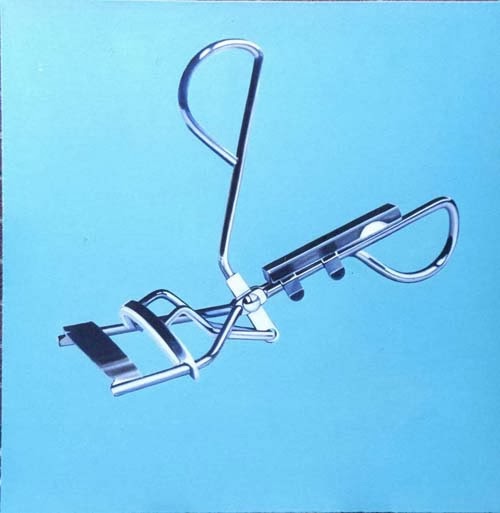 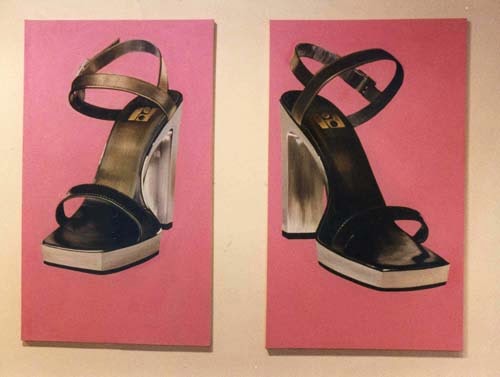 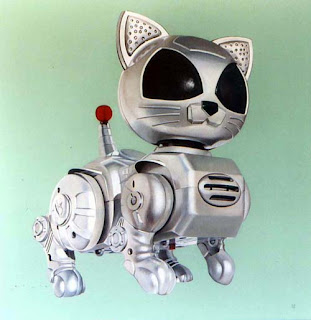 Earlier today I brought round some Ferrero Rochers and was lucky enough to sit in her home eating chocolate, drinking tea, dunking biscuits (generally ignoring certain New Year's resolutions) and have a good lengthy gossip about her work and the stories behind them...

F6 Studios: Hi Katherine, thanks for inviting me in.

Katherine Rodger:  It's alright it's a pleasure.

F6: I was having a look at your website earlier, and I worked out that including teaching, you’ve actually been in the art and design industry for 27 years.

KR: God...that long?! [laughs] I suppose that includes a big gap of looking after kids as well!

F6: I love the pop-art feel of some of your paintings, I was looking on your website and your auroscope one is actually bigger than me!

F6: Must have taken quite a while?

KR: It did. I think the shoes, I did them as a pair and they took…probably the best part of a month for both, but they were done at Northumbria University whilst I was working part-time, because they’re so big I just had to work at them in the studio there. I did the auroscope there too but the rest of them I’ve done at home, and you know most of them are around that sort of size (points to meter square painting of eyelash curlers). That was the first few weeks I was at Northumbria, I did a series of objects that were sort of…I guess at the time I was interested in feminist art and I was interested in people like Jeff Koons, and I was also reading a bit of Baudrillard and thinking about objects and how we relate to objects, and how different objects can have layers and meanings, and how they might connect with one another.

F6: So it’s more than a surrealist slant really.

KR: Yeah I wouldn’t say it was surrealist, unless I guess you could with something like the eyelash curler, you have this tiny little object then you blow it up massive and put it on a really brightly coloured background and isolate it from anything else, then you know you could interpret it as a different thing, such as an instrument of torture or something!

F6: Yeah I suppose it does!

KR: An awful lot of people don’t know what it is when they see it.

KR: Yeahh, a lot of women as well though. I mean I would never have used one you now I just bought it because of the way it looked, but the same with the shoes the shoes were Red or Dead, very very high heels that I couldn’t walk in, not until years later when I did yoga for a few years and I suddenly found I could wear these shoes, but before that when I painted them I couldn’t wear them! But they were just so lovely and they were dead expensive as well, so I thought right I’m going to have to do something with them!

KR: So I think the reason for painting them was partly because I had this feminist art stuff going on in my head, and I was thinking about the ways that women are perceived, and the nature of high heels and the whole sort of issues around that.

KR: Yeah, but at the same time they were really beautiful objects, you know they had merit just as things in their own right, and I just wanted to paint them.

F6: Yeah I think I've definitely bought something that's a work of art in itself, but I knew I'd never wear.

F6: I don’t think I’ve come across them.

F6: What’s the most unusual thing you’ve ever painted?

KR: Um…I don’t know to be honest, I guess there’s a one of a Jesus statue that’s quite an odd thing for me to paint, we’re not religious at all. It was from the 'Mnemonics' exhibition that I ended up having in New Zealand with my colleagues and the sixth-formers. It was about my experience of the place and the people that we met during our time there, and the Jesus statue had belonged to a friend of ours. He and his partner used to collect these weird Jesus memorabilia from all over the world, and every time their friends went away they would send them a little plaster statue, or you know, he had this picture where Jesus’s eyes would look at you as you walked in and follow you round the room.

KR: Yeah he was quite an intimidating guy, for his 40th birthday they paraded him round Auckland in a coffin.

KR: Yeah he was a decent guy he was a media studies teacher…so the Jesus statue was his, just out of all of these objects that he had that was the one that looked as if it would be able to fit well onto canvas, it was something that was quite paintable. He was a really cool guy. There was another one of a robot cat that’s very metallic looking, and belonged to a friend who I taught with. She lived in this really posh flat in the middle of Auckland City, and she wasn’t allowed pets and she was desperate for a pet, really, really desperate for a pet, so she ended up with this robot cat, and that was her pet! She really adored it so she brought that in for me to photograph and paint.

F6: It's really brilliant to hear the stories behind your paintings, as far as commissions and stuff have you got any plans for the future?

KR: Just to start approaching galleries really this year, but I’ve been saying that for the past two years! When we came back from New Zealand was the last time I exhibited in a proper commercial gallery, North Street Gallery and there were about five or six of us, it was a lovely gallery.

F6: I'm sure most galleries would be delighted to have you, you should definitely approach them! Thanks again for the interview, and tea and biscuits, it's been lovely talking to you and I wish you every success! - MK

To see more of Katherine's work or to book a commission, check out her website....
http://katherinerodger.co.uk/index.html
Posted by F6.Studios at 11:05 No comments: